One of the prime advantages of a version control system is to be able to code fearlessly and be able to recover from mistakes.

However, this is not Git 101. More often than not, developers find themselves stuck when they make a bad commit or merge. Let's look at a few useful tricks to recover easily from some common problems.

Note: I will not use advanced examples and focus on steps which will be easy to understand for developers of all levels.

Let's warm up with an easy one:

You made typos in last commit message or you want to improve commit message to make it more descriptive. One common(and wrong) practice is to use a temporary commit message like "Initial commit" and when you are done with the actual development piece, you do not want your commit history to look bad.

By default --amend applies all your staged changes to the previous commits and opens an editor where you can edit the commit message. 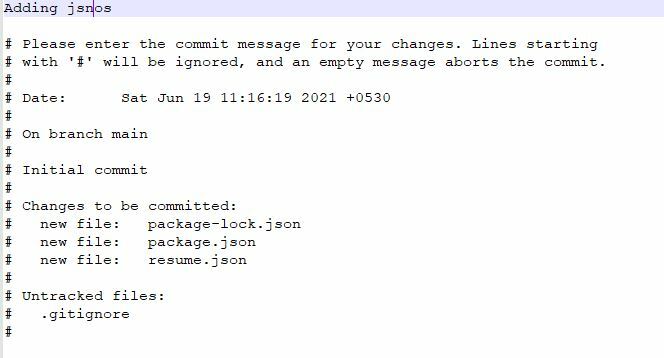 Change your message -> Save and close the file -> changes are captured by git and commit amendment is executed. You will see an output as below which shows the new state of your commit.

You forgot to commit a file. Normally another commit can solve the issue. However, its better to commit those files together. If somebody looks at a commit, they should understand the purpose achieved by it and should not have to look for a subsequent commit for things to make sense. Let's fix this:

Alternatively, If you do not want to change the message, you should use --amend --no-edit. It will not open an editor as it does not expect the commit message to change. It will instantly apply changes and output the last commit.

You deleted a file from your device which was part of your repo. In this case, git can recover lost files from history. Suppose I delete the file test.txt. All I need to do is..

This will bring back the last committed version of test.txt from your repo.

Important: Only last committed version of the file is returned - any local changes you made before deletion are lost and any un-versioned files are not recovered.

Now the syntax is a bit weird as -- is used without an option. But this is just a workaround so that git can distinguish between branch names and files names (for branches, you would use git checkout branch-name).

Note: There are other scenarios where we can recover files using revert and reset commands but I will cover them separately. I don't consider those to be basic scenarios.

Committed in a wrong branch

It's very common in a fast paced development environment to forget switching to a new branch. If you commit your changes in a wrong branch, it is pretty easy to resolve this:

Note: Be careful not to lose any local changes when using --hard. If there are more changes after the wrong commit, make sure you stash them first.

Suppose you delivered a small piece of code but it failed in QA testing or introduced a regression. Now you were asked to urgently remove your code from the release branch so as to not affect the release.

Let's see how you can work on it:

Important - This does not remove your commit from history. It only adds another commit that reverts the changes. To visualize this, new history would look like:

Hope these steps are helpful in improving your daily git usage. I will get back with some deeper topics on Git. If you want to understand some more use cases of these commands, do check out this Atlassian tutorial

You can find more about me at

Did you find this article valuable?

Support Abhinav Pandey by becoming a sponsor. Any amount is appreciated!